Happy New Year and welcome to the first episode of the new series of the Haiku Pea Podcast, a podcast all about haiku and senryu. I hope this year is an improvement on last year, don’t you?

I’m Patricia and a few years back I started the haiku pea podcast to learn about haiku, its history, its structure, how to write and read them and I’m  happy that so many of you have joined me along the way.

This year I hope I can improve the podcast and all our other haiku offerings for you this year, BUT I’ll need help.

I’m running out of video haiku for the Poetrypea YouTube channel. So please if you are out and about and see something that takes your fancy, record a 20 second video in landscape mode, create one of your wonderful haiku to go with it and send them to me. The easiest way to send them is via google drive. Just ask me if you are having problems.

I think I already told you that due to popular demand the print or kindle Journal will be continuing this year. My husband has been press-ganged into helping with the word processing and some of you have volunteered to do some editing for which I am really grateful. I need more volunteers though to be community judges.  A small panel of people per writing topic to have a zoom chat and analyse the haiku or senryu that has caught their imagination and from that panel we will chose a winning verse. I can only achieve that with volunteers. So please let me know if you would be willing to be on a zoom chat and have that chat included in the podcast.

Don’t forget we’re still writing renku. I’ll read you some of the latest one today, but I’ll need volunteers who would like to work together on the renku for the rest of the year. So send me an email if you are interested.

Now I will of course continue the writing topics, they are up on the website, at least the first few. Currently I’m accepting humour haiku and senryu, until the 20th January, and then in February we’re writing haiku and senryu with exaggerated perspective. Now if you haven’t got a clue what I mean you need not worry as in today’s podcast Deborah P Kolodji is coming along to give you some examples and that chat is uncut on our YouTube channel so you can go and read the examples too.

Another improvement I hope to have in the journal are essays and perhaps haibun, so if you have something that you would like to submit please send them to me via email. If you are writing an essay I would like something no longer than 1500 words.

So today we have a chat with Deborah P Kolodji on exaggerated perspective, the renku, and a project that you might be interested in joining. Jim Force will be telling us a little about that and because it’s traditional for the first episode of the new year I bring you a non haiku poem to enjoy.

I know I promised you an analysis of Kelly Sauvage Angel’s haiku “two moons” in our last podcast. I was hoping that I would have a response back from Kelly about her poem, but in honesty I didn’t give her enough time, so we’ll hold that over for another month and see if I get her response.

Before we kick off I want to thank Nadejda Kostadinova for a lovely present. She told me that she’d written a haiku about the podcast which was published in The Bamboo Hut, issue 2/2020

Cheers Nadejda. I was really touched.
Then the following day Richard Hargreaves sent me this via Twitter:

wrapping presents
listening to the Pea podcast
trying not to rustle

Let’s start with this year’s poem. If you are on the mailing list, you’ll have received an email from me last year about Imagism. If you’d like to be on the list please sign up on the website. I’m currently doing some research into Imagism and it’s influence on haiku. Thank you to everyone who sent me reading material and who have entered into my discussions so far. Wayne Kingston, who instigated this project and I think we may have awoken a dragon. Anyway, there will be more of that in a future podcast, but Craig Kittner emailed me and introduced me to a new poet, who I’m really enjoying and I want to read part of one of his poems to you:

It’s F S Flint’s Ogre. F S Flint seems to have been one of the lesser known of the original imagists. Anyway, here is the first verse, you can read more by following the link.

Through the open window can be seen
The poplars at the end of the garden
Shaking in the wind,
A wall of green leaves so high
That the sky is shut off

I found that it inspired me to write haiku that I found in the poem. In this verse alone I found a few haiku:

Have a read through the whole poem and see if it inspires you to write haiku. Send them to me via email and perhaps I will select them for the Spring edition of the Journal, 2021.

Now as I said, I have published some of the topics for this year and the second topic is exaggerated perspective in haiku. I saw Deborah P Kolodji speak about this at the Haiku Society of America’s zoom conference and was really excited. So much so that I chose it as a technique for this year and invited Deborah to give a shortened version of her talk especially for us.

There is a bit of interference on the audio towards the end, but you can find the talk on the PoetryPea YouTube channel in its uncut version, where you can read the poems and discover who the wonderful poets are.

Now as you can imagine when I have the opportunity to talk to fellow haiku enthusiasts, especially such experienced ones, the chat continues after the workshop. I’m so pleased that I continued to record because I can give you a little bonus which you won’t find on YouTube.

Now let me bring you the latest from the renku; Golden Leaves Drifting. My thanks to all the poets who are working with me on this one; scott zeilenga, Kim Russell, Riham El-Ashry and Lorraine A Padden. Remember if you would like to get involved, let me know by email.

sunlight
falling on fresh snow . . .
the tips of orange leaves

a frosty fox
licks the day into shape

head down
following a stranger’s footprints

ideas in motion
the wind in the trees

waxing moon
the rhythm of a slow thaw

Now, to conclude the podcast I have a little treat for you. Remember Series 3 Episode 20,  we met Nika, AKA Jim Force. I told you at the time he had an interesting project and today I’m delighted to say he is with us to tell us a little bit about it.

“The postcard project comes about from my receiving art postcards from artist friends. It was a delight to receive these cards during a time of being relatively isolated from normal activities. In response, I decided to start sending out haiku postcards to fellow haiku poets and to friends.

The project is basically a haiku exchange activity. The idea is that I will send you one of my haiku postcards made especially for you. In exchange, you will send me a haiku in one form or another by return postal mail. While my cards include a haiku and a bit of artwork on the front and addresses, stamp and a brief greeting on the back, a haiku on front with address on the back is just fine. Other than postcards like the ones I’ve sent, I’ve received a haiku frig magnet, printed haiku cards and a small haiku chapbook. I’m open to whatever works for you.

In reading the latest issue of Modern Haiku in which there are haiku from over 200 poets, there are only a few of whom I know anything about. My goal with this project is to get to know a few more fellow haiku poets and to become more familiar with their work.

While I look forward to hearing from you and exchanging haiku cards, I also invite you to share your haiku with others in a similar way, not just with haiku poets, but also with friends who might enjoy receiving a card.

You can see some examples of Jim’s work at the end of the shownotes.

Thank you Jim. I think this project is more important than it would seem on the surface. I was recently at a British Haiku event, zoom of course, a memorial for David Cobb, and there were a few people at the event who had received postcards from David with one of his haiku written on them. They really seemed to treasure them.

I’m sending my inaugural postcard to Jim, but having had this chat with him I went out and bought a number of postcards which I will send to my family and friends. I hope that you’ll join Jim in his project, but even if you don’t send postcards to Jim, maybe you will follow his lead and send them to family and friends.

Sadly that’s it for now. In two weeks I’ll be reading your haiku and senryu on the topic of Spring and Autumn. The format will be a little different, come along and listen and tell me what you think.

Don’t forget I’m accepting submissions for humourous haiku and senryu until the 20th of January. Keep them coming. They can be belly laugh humourous, or just raise a smile, ironic, filled with word play and puns, I would just like some work that will bring a little lightness to our days.

So, until next time, keep writing…

If there is something I’ve got wrong or missed out, just email me and I’ll put it right, Ciao 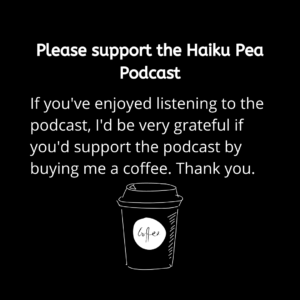 The Haiku Pea Podcast started small in 2017. I thought I would more or less be talking to myself, but reckoned without the power of haiku, and the word spread. Now here at Poetry Pea there are a number of ways to celebrate haiku with lots and lots of like minded haiku poets.

In 2021 the Haiku Pea podcast  will be offering two podcast a month on the 1st and 3rd Mondays of the month, the first to explore haiku topics and the second to hear the haiku and senryu that you have been writing.

You can listen here on the website or you can find us on a number of podcasting platforms: iTunes, stitcher, spotify, amazon, google, player and tunein radio not forgetting YouTube.

Please subscribe the podcast where ever you chose to listen and the latest episode will be delivered to your feed, and if you have a moment leave a review. Alternatively, you can sign up for our mailing and you’ll get information about every new release and all the latest news.

Some of Jim’s Postcards: 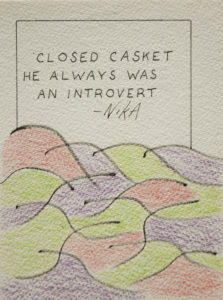 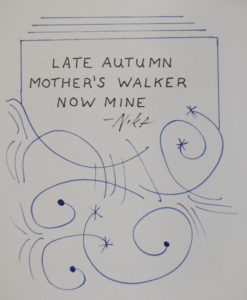 Buy me a coffee

We use cookies to ensure that we give you the best experience on our website. If you continue to use this site we will assume that you are happy with it.Ok